Southeastern New England is host to many wonderful trout fishing opportunities. I am going to list a few of my favorites. While I limit the streams where  I will guide an angler, there are a multitude of wonderful fly fishing locations within a few hours drive of Rhode Island.

Wood Rivers and its tributaries

The Wood River is perhaps Rhode Island's most productive trout stream. It is over 16 miles long, extremely fertile and rural. Much of the river is accessible to waders. The stretch that runs through the Arcadia Wildlife Management Area offers the angler some of the most varied fishing they will experience. There are long runs and riffles as well as some very productive pools. Almost the whole run of the river through the Arcadia WMA is covered by a canopy of hardwoods and evergreens. The three most popular access points in Arcadia are called the Check Station, High Banks and The Pines. Many of the pools, runs and riffles were named by the locals over the years. At any of these accesses, you'll be sure to run into a local angler that might be willing to share some of his local knowledge with you. The State of Rhode Island stocks both Brown and Rainbow Trout. Long believed to act as the canary in the mine, wild Brook Trout are making a lot of anglers smile. This is a testament to the fact that the Wood River is getting cleaner. There are many hatches during the year that most fly anglers are familiar with. You'll see BWOs, Hendricksons, Caddis and Terrestrials. However, on hot, humid July nights be prepared for a treat. Rhode Island's Wood River is home to a wonderful Hexagenia Limbata hatch. These mayflies start hatching as the whippoorwills start their nocturnal calls. The action can be fast and furious as the most reclusive browns lose all their inhibitions. I highly recommend joining me for a night of fly fishing during the Hex Hatch.

The Swift River is the definition of a tailwater fishery. Drawn from 70' below the surface of the Quabbin Reservoir, the Swift River discharges through the base of Windsor Dam and boils up to what is know to locals as the "Bubbler." From this point downstream to Rte 9, the Swift is an outstanding Catch and Release - fly fishing only, tailwater fishery. Cold water from the Quabbin, with seasonal water temperatures ranging from 37 to 61 degrees, allow this river to be an excellent year-round trout fishery. It is well stocked with rainbows with some nice brook and brown trout in the mix. The water is gin clear and it's not uncommon to have Trophy Rainbows swimming between your legs. You might also find a few landlocked salmon in the Swift, which may have been washed over the spillway. Trout in the 16-18 inch category are not uncommon. By mid summer the fish have seen every conceivable fly and have become very well educated and more difficult to catch. When this happens, long leaders are a must. The immediate area at the "Y" Pool, is one of a few spots where dry fly  fishing can be had year 'round. You will find many fly anglers here. Below Route 9, there are numerous riffles and pools. These areas have more insect activity as well as spin and bait anglers.

The Farmington River that most fly anglers talk about is the West Branch of the Farmington River, in particular the section from Riverton downstream to New Hartford. This section of river, which has the highest trout population density in the state - rivaling some western waters - is the product of a 200-foot-high dam which releases a fairly consistent flow of cold water year round. This is called a tailwater fishery.

The combination of the river's size and the release of 50-degree water from the bottom of the dam creates the ideal habitat for trout to thrive and grow.

Additionally, access on the river is completely unrestricted in this section, which also includes two Trout Management Areas, the Upper TMA reserved for catch and release fishing with barbless hooks only. The Upper TMA, considered the best area for anglers, particularly those looking for dry fly fishing, runs from one mile above the Route 318 bridge downstream to the Route 219 bridge. The pool below the Route 318 Bridge is called "Church Pool". It is my favorite pool on the river because that's where I caught my biggest Rainbow.....28 inches!!

The river is heavily stocked with adult trout, with the average fish in the 12 to 14 inch range. Much larger trout, mostly brown trout, can be caught, with many fish over 20 inches hooked each season. 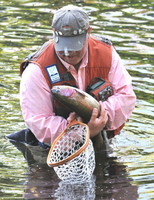 Where to Find Us:

Check out the newest fly fishing gear, blogs and news on MidCurrent.com